Three narratives about one story of a woman and a man; it is based on the legend about the man with a blue beard. There are countless variations of this story and they were compiled by many world-renowned authors. We are interested in the inversion of man’s dominion and woman’s curse. Men are swayed between two fictions. On the one hand, they have to pretend gentleness and empathy and on the other, they feel to be at mercy of the wild male myth. The woman, while turning herself into an angel, changes the man into a beast. It is not enough to be loved only. Even the most promising, budding feelings must be checked and controlled in order not to become the pretence for other, less beautiful feelings and desires.

It is inspired by movies of the so-called Korean genre construct and films that play with narration and different time lines.

„… Director Petra Tejnorová together with Karel František Tománek use the ancient legend of Bluebeard to examine the relationship principle of men against women. They put men’s violent nature in doubt and using a contemporary tale, they try to answer the question as to which sex is actually crueler towards the other one.

And what does the society really ask of men and what of women? The performance is rich in fantasy moments which incorporate elements of horror, thriller and slapstick. Following the example of Korean film narrators the authors indulge in time loops, telling the story from the end and so on…

… The young and talented ensemble of Dejvické Theatre guarantees a lively and fresh approach to a matter that deals with feelings men and women have on meeting and parting. That ever-repeating elasticity of feelings and thoughts, in which everything is nicely drawn only to be erased by someone else, is aptly expressed on stage. This is done with the use of video and light, where the doorframe, outlines of stairways, the fish tank or flower pots are drawn and joint by a point of light. Sometimes it flashes, sometimes it goes out for good…“

„The new production of Dejvické Theatre has exceeded even its own grand expectations. It is hard to describe this feat which comprises so many individual, functioning elements. An excellent cast, witty dialogues and a special atmosphere that leaves an impression with the audience: that is just a sample of what to expect in Dejvické Theatre …“ 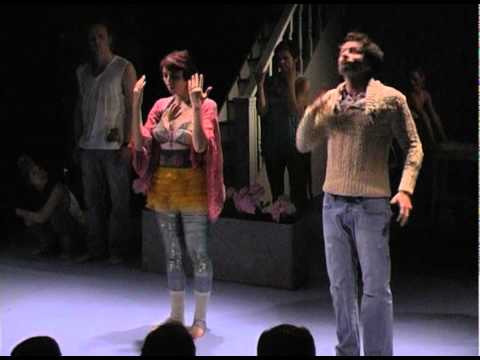